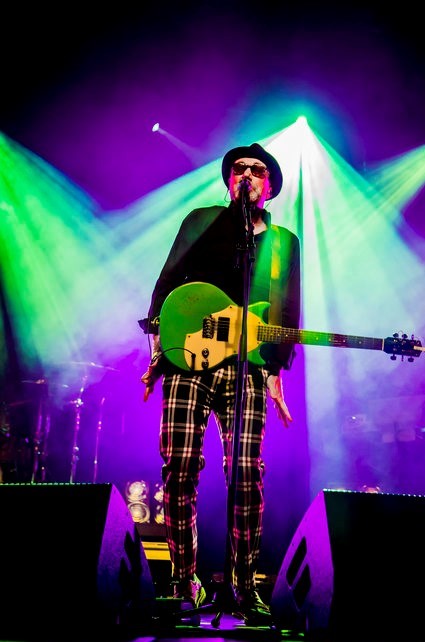 John Watts’ 41-year career as Fischer-Z includes 20 albums and over 3000 concerts worldwide with success spanning continental Europe and album sales in excess of two million. Peter Gabriel, Steve Cropper and Dexy’s Midnight Runners’ Brass Section have all contributed to recordings. Fischer-Z have performed to crowds of 167,000 alongside James Brown in East Berlin, toured with both The Police and Dire Straits, appeared with Bob Marley on his final European festival tour and have toured in both the USA and Canada. In recent years Watts has developed a reputation as a multimedia artist, poet and playwright, amassing an impressive and eclectic range of creative work characterised by verve, warmth and humanity.

Fischer-Z developed in punk clubs while Watts was still studying clinical psychology and working in mental institutions. The first Fischer-Z album Word Salad was released in 1979 on United Artist Records, alongside The Buzzcocks and The Stranglers. Word Salad was a cult record in the UK (John Peel supported the single Remember Russia ) There were several appearances on The Old Grey Whistle Test and a first Top of the Pops appearance with the successful European single The Worker – the story of Watts’ father’s daily commute to London. The second album, Going Deaf For a Living, firmly established his Watts’ ability to convey worldly political issues in narrative songs against a background of quirky pop music (comparisons were made with both Talking Heads and Ian Dury). The So Long single (1980) was featured heavily on the fledgeling MTV channel.

Fischer-Z’s European success was cemented with Red Skies Over Paradise (1981), The album included songs that resonated with audiences right across Europe. Berlin, Marliese, Battalions of Strangers, Cruise Missiles and the title track have all been described as classics of that era and sales topped a million. Watts disbanded the original Fischer-Z line-up in the summer of 1981, feeling the band had drifted too far from their original art punk ideals. Watts’ first two solo albums One More Twist (1982) and The Iceberg Model (1983) spawned the singles One Voice and unique The Iceberg Model track. He briefly formed a band called The Cry and released a pop/dance album Quick Quick Slow (1984) produced by the highly respected American Jimmy Douglass. In the 1980s, Watts was deeply influenced by the political events unfolding as Thatcher tried to beat down the trade unions in Britain. His 1985 song Dark Crowds of Englishmen is about the miners’ strike and the disappearance of a way of life.

Watts reformed Fischer-Z with a new line up in 1987 and had successes including singles The Perfect Day (1988), based on lonely-hearts ads and Say No (1989), a call to arms for the poor and the powerless – taken from the albums Reveal (1988) and Fish’s Head ( 1989).The Destination Paradise album (1991) was made at Peter Gabriel’s Real World studios.The song Further From Love and the title track, highlighted civilian suffering in times of war. The next two Fischer-Z albums Kamikaze Shirt (1993) and Stream (1995) continued to combine a political point of view with songs grounded in Watts’ real-life observations and experiences. He returned to his solo career with Thirteen Stories High (1997), one of his most admired indie guitar-style albums. Many songs such as I’m a Reptile and Angel of Gardenia are firm favourites with the fans. For his next album Bigbeatpoetry (1999) he branched out combining poetry, prose and song lyrics with a DJ and beats. An era of multimedia projects began with Ether Music & Film (2002) recorded internationally, with musicians in the streets and in their own homes using only his laptop. The entire project was filmed and released as an album and a DVD.

Real Life Is Good Enough (2005) was a noisy two-piece, electric guitar and drums album made with Sam Walker .It was compared with The Black Keys early albums. The sister album, It Has To Be (2006), consisted of tunes drawn from his interaction with strangers encountered in ten different European countries who shared some of their life experiences. He wrote a song for each of them. The album package included poems and short stories written by Watts. The Morethanmusic album (2010) added a kaleidoscope of orchestral and filmic colour to Watts’ work and included the single Head On, inspired by his observation of a seven-year-old child watching the live execution of Saddam Hussein on a mobile phone. Watts made a film to accompany each track on the Morethanmusic album.

The This is My Universe album, released in 2016 included the track Martha Thargill where Watts revisits the miners’ strike 30 years on. The title track This is My Universe brings together his music, poetry and philosophy of life to great dynamic effect. He casts a dark and rueful eye over love and marriage in the pop single Just-a-Man and creates a manifesto for the proactive and genuine romantic in Just Like Justice. His recurring political themes appear once again in the songs Tale of Bales and Winston.

2017 is a milestone in the Fischer-Z journey; the 40th anniversary of the band’s first show, the release of a 20th studio album and the pulling together of Fischer-Z in a continuous timeline from 1977-2017. ‘Building Bridges’ is the provisional title of the new work containing songs about the major challenges of our time; to build bridges over religious divides, between political left and right, between rich and poor and the conflicting attitudes toward global migration.

2018 will bring the release of a the exciting new multimedia project the ‘F Card’ which combines new music, film and even a club in a ground braking form. As expected this release will be supported with many more Fischer-Z shows across Europe and the UK after the hugely successful 2017.